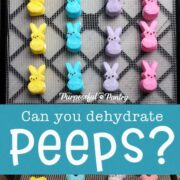 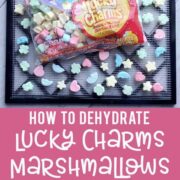 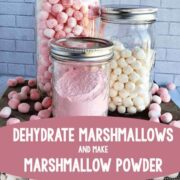 Learn how to dehydrate marshmallows for yourself, and take the next step with how to make marshmallow powder with this easy DIY! And yes, they are just like those fun cereal marshmallows you remember as a kid!

But how often have you been disappointed to go into your pantry and all you find are little envelopes of some cheap cocoa mix and a half bag of dried up, gummy, sticky marshmallows that are just sad? We have to fix that!

One option, of course, is to make your own DIY cocoa mix that's really tasty, and to vacuum seal your marshmallows so that they stay fresher, longer. And that's an experiment you can do with your kids one day because it's fun and they'll want to do it over and over.

But there is an alternative!

You can dehydrate marshmallows!!! Really!  Dehydrating marshmallows is one of the easiest projects for a beginning dehydrator recipe.

There is virtually no prep work and little maintenance. Not only have you created a handy pantry staple for cocoa down the road, they are a super-fun snack treat for kids! Think of that lucky cereal that you buy in the spring with all the shapes -- but better because you don't have to contend with the icky cereal - just the good bits of crunchy sweetness!

So go grab a few bags of marshmallows. The size and shape don't matter, and the flavored ones can be really fun to do around the holidays.

While mini marshmallows can certainly go on the dehydrating racks, it's helpful to cut larger ones down. It just makes the drying time go so much faster. You can use scissors or a knife, but I suggest keeping a wet cloth with you to occasionally clean the blades. Confectioner's sugar (powdered sugar) handy to dust your scissors or knife helps, too.

This does mean that the larger shaped marshmallows won't have their shape any longer, but it could save you hours in drying time.

2. Lay marshmallows in a single layer, not touching

While there are many foods I am not so particular about separating (such as greens as they begin to shrivel almost within the hour), I do make a little effort to separate marshmallows so that they don't stick and dry inefficiently.

But marshmallows are playful and like to roll and move, so don't fuss over placement.

One Excalibur Dehydrator tray holds about half a bag of mini marshmallows easily, giving plenty of room to breathe.

Timing is dependent on how large your marshmallows are, the humidity level of your home's atmosphere, the strength of your dehydrator, and the position of the Earth to Venus (just kidding on that last one - not really, but really).

*NOTE: for large shaped or highly colored marshmallows, dropping them temperature down to 125F/35C may help stop some of the puffing that happens with things like Peeps marshmallows or the fancier marshmallows (see below)

However, know that you just can't ever dry them too long. The longer they stay on the trays, you can be assured they are fully dried. I actually kept this latest batch in for over 24 hrs. Partly because it had been raining all day, and partly because I wanted them SUPER dry for doing the powdering.

How do you know when dehydrated marshmallows are done?

Dehydrated marshmallows are done when they are completely crunchy and shatter when you bit them or crush them in your hands. If you find a little area that still looks raw, dry them more.

But first, before you test, allow them to come to room temperature before testing. They stay a little soft while they're still warm.

Skip to the 11:54 mark if you want to jump straight to the powdering phrase.

If you'd rather skip the work, you can purchase dehydrated marshmallows in bulk, but you'd want to repackage them for long-term storage. My son gets this canister version for Christmas every year. He snacks on them and adds a little hot chocolate to his mug of marshmallow bits.

Unlike a dehydrator, ovens don't go low enough to dehydrate without cooking, unless you have the new ovens with a dehydrating feature.

What you can do is set your oven at its lowest setting, and prop the door open to allow much of that heat to escape. I don't have an accurate time frame as I've never done them that way, but you can expect anywhere from 5-12 hours in the same fashion.

Please be cautious if you have young children as they won't know not to touch an open oven door that may be hot.

This is a cheat. You can just leave a bag that's been opened but not sealed completely in your pantry. In about three months, you'll have gummy, hard little marshmallows. Leave them a few months more and they'll be rock solid dense little balls. NOT the fluffy, airy, crunchy delights that we're talking about.  I hate it when that happens, but it does work!!

Tools I use in my kitchen to dehydrate:

How to Store Dehydrated Marshmallows

Store in airtight containers or use a vacuum sealer to seal a jar if you want, but it isn't necessary. You can use a mylar bag for long-term storage. You can also double bag into freezer ziptop style bags.

However, zip-top bags are not a great solution for long-term storage as they will allow air to permeate the plastic after a while. However, you can do smaller quantities in zip-top bags and then store in a larger, air-tight container with no problem.

As a quick tip -- I shared in this video how to store your fresh marshmallows, which would work for your dehydrated ones as well. In the video, you'll see a large canister of dehydrated marshmallows.

Hit the play button to get video to play. Consider subscribing to my Youtube channel for more dehydrating and food storage videos!

How to Make Marshmallow Powder

One of the first things you'll think after you dehydrate marshmallows is, "How on earth will I use all of these?" I'd like you to consider marshmallow powder.

Marshmallow powder is as easy to do as grinding herbs. They powder effortlessly (assuming they are completely dehydrated).

How to Store Marshmallow Powder

It's helpful to make only as much as you need. However, you can store dehydrated marshmallow powder in an airtight container, with a mason jar and good lid being preferred. Because of the ingredients, it doesn't clump in the same fashion as dehydrated fruit powder, but over time, the sugars can tend to get clumpy, which is why you don't want to store big batches of it.

How to Use Marshmallow Powder

This is still an area we're experimenting with, but these are some practical ways to use it

I'd love it if you'd leave a comment on a way you've used marshmallow powder!

Make Your Own Homemade Marshmallows

If you're really intrigued by marshmallows, you can try some of these homemade varieties:

Historically, homemade marshmallows don't always dehydrate well. But if you find yourself making them, and have a few leftover, give it a try so that you'll know if your recipe works. I tried some raspberry ones that I recently purchased at a local farmer's market and they did not. But I've heard tell that some folks have been successful at it.

Can you Flavor Store-Bought Marshmallows?

Sometimes, you will hear that there is a new flavored marshmallow on the market, but no matter how many stores you visit, you can't find them. I ran into it this year with the peppermint marshmallows (and do NOT buy the Walmart version - they taste like Wint-o-green, NOT peppermint).

It is as simple as spritzing some flavor extract onto your marshmallows. Don't soak them, but spritz them with a fine spray. I keep a small spray bottle I picked up in the travel section to use for spritzing jobs in the kitchen. I mix a little water with extract, and just spritz it on the surface of the marshmallows.

Can You Dehydrate Peeps Marshmallows?

Yes, yes you can! Learn more how to do that here.

Can You Dehydrate Lucky Charms Marshmallows?

Why, yes, they are magically dehydrated! These are larger than the cereal box variety, but by using the above instructions, they become crunchy marshmallow goodies.

We did find, however, that the red did not have the same results and could be occasionally not such a great bite, even though they were completely dehydrated. But they are so fun.

Or..if you want to keep your dehydrator open for another project, you can just get a big ol'bag of 'Charms Cereal Marshmallows' and add them to everything - even some Rice Krispies Treats!

Every season brings out a new flavor of marshmallows, but nothing like what fall and Christmastime bring.

The flavors of fall have led way to all sorts of twists on marshmallow flavors and shapes. While Peeps started it long ago, the last few years have brought a flurry of flavors to play with.

Dehydrate them all. Really - they work the same. The only ones I don't recommend drying are the ones from really off-brand manufacturers (stories that they melt and make huge messes) and stuffed marshmallows.

Here are some Make Your Own Hot Chocolate Recipes you might want to try, too! 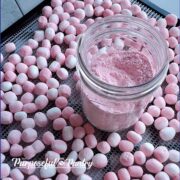 FYI - regular marshmallows do not shrink. They keep their same basic size. Drying Large Marshmallows Typically, these take much longer to dry - so expect in excess of twelve hours. Cutting them in half or quarters will help. Peeps or other 'colored' marshmallows Lower the temperature to 125°F to help them slow the puff as they tend to enlarge. You're welcome to do this with the regular marshmallows, it just extends the drying time (but they don't puff or shrink).
Tried this recipe?Mention @thepurposefulpantry or tag #thepurposefulpantry!
« DIY Hot Cocoa Mix (Bulk Recipe)
Easy DIY Dog Chews from Dehydrated Sweet Potatoes »