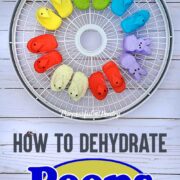 Like Peeps but want a change of texture as a treat? Don't just let them go stale, but dehydrate them! Dehydrated Peeps are fun and can be a way to extend their use through the season! Your kids will love to do this with their Easter treats!

There is a fascination in the dehydrating world for drying marshmallows for a snack, for inclusion in hot cocoa, for making hot cocoa bombs, etc.

For those of you not in North America, Peeps are marshmallow treats sold mostly in the spring (though they are showing up for other holiday seasons now as well). They are a little spongier than a typical commercial marshmallow and have a colored sugar coating.

As the years have progressed, Marshmallow Peeps have expanded to include many flavors such as Cotton Candy, Hot Tamales, Chocolate Pudding, Sour Watermelon, etc.

There is a real love/hate relationship with Peeps - you either really love them, or you really don't. There aren't too many in the middle.

My crew loves them stale by letting them sit out in the open for quite a few days to get stale, giving them a bit more texture.

But here is a step up to how you can use your Peeps and give them a whole different life!

HOW TO DEHYDRATE PEEPS

Yes, unlike their cousins the mini marshmallow, Peeps do tend to puff up a bit when drying.

Why do my Peeps still feel gummy on the inside?

Because they are not dry enough. Put them back inside and dry more.

Why would you dry Peeps?

The simple answer is: "Because I can".
It's fun, it's a different way of looking at a pretty one-dimensional food, and it's a great way to get kids interested in dehydrating with something other than apples and bananas.

How do you store dried Peeps

Store in an airtight container for a month or two. They will begin to absorb moisture over time as is the nature of it, but look at them as a short-term snack more than a long-term storage solution

Can't I get the same result by just letting Peeps go stale?

The texture is completely different between a stale Peep that so many people like vs the honeycomb effect of a dehydrated Peep. But it's a favorite way of doing it, as well! 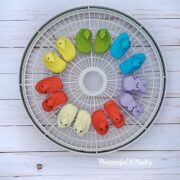 Print Recipe
5 from 1 vote
PIN THIS!!

Note: the lower drying temperature for Peeps as well as other highly colored/shaped marshmallows is to help stop the puffing of the marshmallow that can happen.
Tried this recipe?Mention @thepurposefulpantry or tag #thepurposefulpantry!
« Ways to Rehydrate Dehydrated Food
How Loud is a Dehydrator »